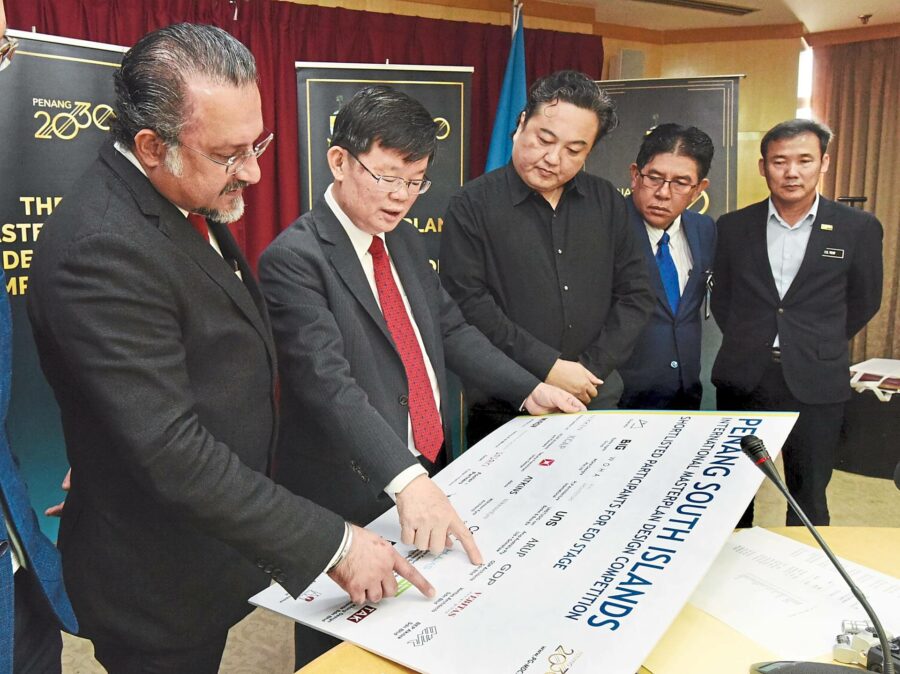 A TOTAL of 27 local and international companies and firms have been shortlisted in the Masterplan Design Competition (MDC) for the Penang South Reclamation (PSR) project near Teluk Kumbar.

“We are happy with the ROI entries from countries around the world in various continents. The interest we receive at a global level towards the Penang South Islands (PSI) is encouraging.

“And from the ROI we received, one third were from Malaysia.

“Out of the 27 shortlisted companies running for the Expression of Interest (EOI) stage which will run until Dec 30 this year, nine were Malaysian companies, ” he said during a press conference in Komtar on Friday.

“They also need to look at issues involved while working on the project and some ideas on what they intend to do in the project.

“Out of the 27 shortlisted ones, a further five companies will be selected and proposed to the state.

“The five selected ones will then participate in the design stage which will begin on Jan 8 next year.

“After that, the submissions will be submitted in April and I believe there will be a public exhibition at the end of the process for comments and public engagement.

“The whole exercise should be completed by May, ” he said.

The competition is a Penang government initiative organised in collaboration with the Malaysian Institute of Architects Northern Chapter under the auspices of the Board of Architects Malaysia.

Further details on the competition can be found at www.pg-mdc.com.

Chow said in the process involving the five finalists, the consortium finalists need to be joined by architects and planners from Malaysia.

He said the PSI was a strategic initiative by the state as a catalyst for social and economic agenda in line with the Penang 2030 vision.

“PSI would be able to create high-income jobs in Penang in the shortest time to come, ” he added.

Under the PSI project, the state government is proposing to reclaim 1,821ha of the sea on three man-made islands south of Penang International Airport towards the east around Permatang Damar Laut.

The project is to create a land bank to fund the Penang Transport Master Plan (PTMP).

Chow said the project would prepare Penang in heading towards Industry 4.0 by realising the characteristics of a smart city complete with an efficient and integrated transport system.

Meanwhile, Chow said the state and SRS Consortium were still working to finalise the project delivery partner (PDP) agreement, hopefully by next month.

“There will not be a new PDP as SRS Consortium has been given the letter of award to be the PDP for PTMP.

“But we could not sign the formal agreement with SRS Consortium as approval for the various projects have yet to be secured.

“We hope to sign the PDP agreement next month so that our PDP can continue with the second stage of work, that is calling for tender, evaluation of tender and appointment of contractor, ” he said.

He said depending on the financial arrangement, the state will decide on which package to start first as the project financing would have to be finalised during the period.

“Of course, reclamation will have to start first, followed by either the Light Rail Transit (LRT) or the Pan Island Link 1 (PIL 1).

The RM9bil LRT line will begin from Komtar and pass through Jelutong, Gelugor, Bayan Lepas and the airport before ending at the PSR.

The RM9.6bil PIL 1 is a highway project that connects Gurney Drive to the Penang International Airport.

Sorry, the comment form is closed at this time.

The Penang South Islands (PSI) is the state government's strategic transformative development plan that will reconstruct the sleepy southern coast into a Smart City and word-class tourist destination.